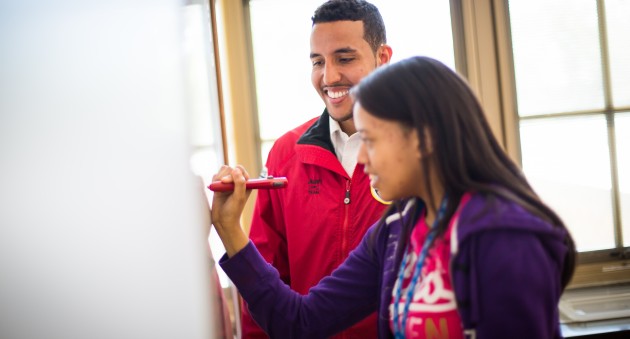 Research confirms that along with other factors, poverty has a detrimental effect on children’s learning and achievement. In Cleveland, this is particularly true, and the issue take on greater consequence and urgency.

According to the 2016 Census, 53.5% of Cleveland’s children live in poverty. Nearly half of the city’s students are at risk for dropping out — and those who drop out are eight times more likely to become incarcerated and three times more likely to be unemployed. According to City Year Cleveland, when a student drops out of school it has a lasting effect on communities, and the organization is working to fight the odds.

City Year Cleveland is an education-focused organization that partners with public schools in high-poverty communities to help keep students in school and on track to graduate. City Year is the only national organization that places full-time, trained young adults in schools to provide individual attention to struggling students, bridging the gap in high-poverty communities between the support that students need, and what their schools are often resourced to provide.

In Cleveland, this means providing high-need schools with additional human capital at a low cost to address the education crisis. Through a neighborhood-based approach, City Year partners with the Cleveland Metropolitan School District (CMSD) to serve in nine CMSD schools. Highly-trained, diverse AmeriCorps members volunteer full-time and work 1:1 to provide individual interventions for off-track students, and after-school programs and events for the whole school. Student outcomes are measured at the beginning, middle, and end of year.

The organization’s impact includes increasing English and math proficiency by two to three times the normal rate compared with similar schools that did not have City Year, as measured by state assessments. City Year Cleveland was also cited by CMSD partners as having had an impact on nearly doubling the graduation rate at East Technical High School in the partnership’s seven years.

This includes the ongoing training of our 68 City Year Cleveland AmeriCorps members who will provide 1:1 interventions to off-track students identified as needing supports in attendance, behavior and math and English coursework, and for the resources necessary for after-school programs, events and tutoring for all students in each partner school, totaling approximately 3,500 students.